You know Hurricane Season Has Arrived When...

...there are three tropical systems -- Hanna, Ike and Josephine -- lined up in the Atlantic, and the remnants of Gustav are lingering in the central U.S. Suddenly, the comic below doesn't see so far-fetched... 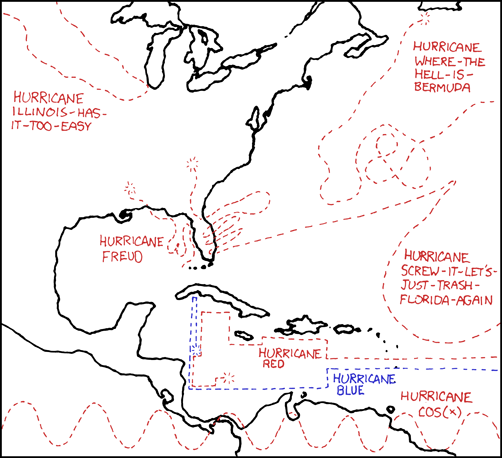 The nerd in me was immediately drawn to hurricane COS(x). Though would that be considered a Pacific or Atlantic storm? See this comic and others at xkcd.com.

See our full forecast and the latest on Hanna.

In other news, someone just stole my lunch money.

The NHC might have to refer to this in 10 years when we exhaust the Latin and Greek alphabets.

And the geek in me got a laugh out of Hurricane Cos(X) as well.

Generally these areas are too close to the Equator for the necessary Coriolis force to start a tropical system spinning. Most tropical cyclones need to be north [or south] of ten degrees latitude from the Equator. Folks who worked for the Panama Canal Company will remember that the Canal and Panama City itself are situated on the ninth parallel, North latitude. [The Caribbean entrance to the Panama Canal is actually WEST of the Pacific entrance due to the uniquely sinuous topography of the Isthmus of Panama. The sun in Panama City rises over the Pacific and sets over the Caribbean so to speak. During June, Centaurus and the Southern Cross are visible to the SE over the Pacific, which was called the "South Sea" when Balboa discovered it early in the 16th Century, hence the phrases "South Sea islands" and the infamous "South Sea Bubble" a sort of low-tech frenzy of speculation similar to the "Dot-com Bubble" of the late 1990's.]

The only hurricane to strike South America in recent years was an extremely rare [and regarded as unprecedented] South Atlantic storm which struck Brazil late in February some years back. This rare South Atlantic hurricane was regarded as "evidence for global warming" since the ocean down there rarely gets warm enough nor does the ITCZ move far enough to the south for tropical cyclones to form there.

Another of my posts, mysteriously posting as "Anonymous. [Wish my computer wouldn' do this to me!]

Is the track of Hurricane Freud making Florida "anatomically correct"?