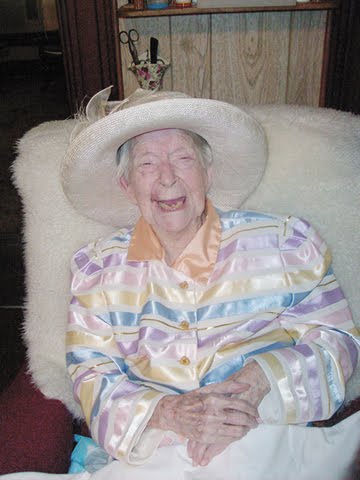 One part of the AFP story caught my eye:

"She also asked what happened to the former record holder."

Think about that for a moment. World Oldest Woman is one of those titles you can only get if your predecessor becomes, well, your predecessor. "What happened to the former recorder holder?" "Well, she decided she was sick of aging. Too competitive. She's going to sit this year out."

I doubt that would happen, though. Unlike competitive eating, competitive aging is a marathon, not a sprint. The only thing you have to do is avoid falling anvils, rising blood pressure, and generally stay out of drafts, the wind kind and the kind that takes you to Vietnam. So far, I'm still in the running, because the primary requirement is that you have to have not died. So far, I have never died -- well, just the once, but it was metaphorical.

For now, Eunice is safely ahead of the competition. This reminds me of the old poem:

Very very very few
People die at ninety-two.
I assume that I shall be
Safer still at ninety-three.

Congratulations, Eunice! And sincere condolences to the former title holder and her family. Race well run.

When George Burns was asked, "What's the best thing about getting old?" he replied:

I seem to recall watching an interview with one of the former record holders. They asked her what the secret to her long life was, and she replied:

I guess she didn't take her own advice.