"I faced a lot of criticism as president. I didn't like hearing people claim that I lied about Iraq's weapons of mass destruction or cut taxes to benefit the rich. But the suggestion that I was racist because of the response to Katrina represented an all-time low."
-- Excerpt from George W. Bush's new memoir, Decision Points

Mr. President, I'm happy for you, and I'ma let you finish, but I think maybe 9/11 -- or, heck, even the financial meltdown! -- might have been the worst moment of all time, in your presidency. Of all time! 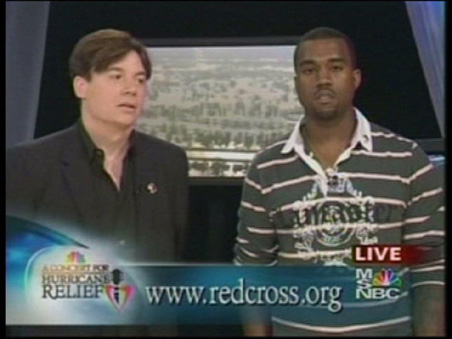 The interview went on:

Lauer: "You say you told Laura at the time it was the worst moment of your presidency?"

Bush: "Yes. My record was strong, I felt, when it came to race relations and giving people a chance. And it was a disgusting moment."

Lauer: "I wonder if some people are going to read that, now that you've written it, and they might give you some heat for that. And the reason is this --"

Lauer: "Well, here's the reason. You're not saying that the worst moment in your presidency was watching the misery in Louisiana. You're saying it was when someone insulted you because of that."

Bush: "No, and I also make it clear that the misery in Louisiana affected me deeply as well. There's a lot of tough moments in the book. And it was a disgusting moment, pure and simple."

Well, maybe he's right. Sure, 9/11 was pretty bad, but what really gives me nightmares is the idea that somewhere, Kanye West might be angry with me. You never know! Kanye is the ultimate arbiter of things. I read his Twitter feed daily, and as a consequence, I am wiser, better, and more credenza-owning than I was before.

I figure that if terrorists come pouring into our great nation and seize our resources and demolish our way of life, I will be strong in the knowledge that I still have Kanye West's respect. But if that goes -- well, is there any point? This man makes music videos with phoenixes! Phoenixes are mythical beings that once soared in the sky and then plummeted to earth, similar to George W. Bush's approval ratings.

Sure, there were tough times in the Bush years. But they all pale in contrast to anything Kanye says, ever. Remember that fuss about weapons of mass destruction? That was nothing! It was just like when you can't find your glasses, and you search all over for them, and then you invade Iraq, and then it turns out your glasses never existed at all! I do that frequently, and it doesn't bother me a bit. But recently, Kanye tweeted, "Never put me in a box," and I was so worried that this might be a reflection on me that I stopped eating and became listless and indolent.

George W. Bush's statements are just an accurate reflection of Kanye West's power. Remember the financial crisis? As long as Kanye can afford a row of diamond teeth, I say, "What financial crisis?"

If Kanye ever yelled at me like that, I'd probably go commit ritual seppuku, so as not to disgrace my family and country. So I don't know how Taylor Swift goes on each day! She even wrote a song about it! Kanye West wasn't even speaking to Bush directly, and he still hasn't recovered!

Whew, I thought that ComPost was going to be out of business now that the rent doesn't seem all that bad, and Christine O'Donnell isn't us any more. But the former president has risen to the top of the ComPost heap to save all of our jobs yet again.

However, I do have to agree with Mr. Bush that he really DOES care about what black people say about him. What Mr. West should have said is that Bush doesn't care about poor people.

Unfortunately, the poor people in Bush's flight path over New Orleans were 99% black, but he didn't care about the other 1% either.

But I still think it's unfair to say that the (con) artist formerly known as President didn't care about poor people. I care about my dog being alone all day, so I got another one for him to play with.

Bush gave away a lot of public money to very rich people so we could have more poor people to keep us company. You'll have to admit, we're not lonely any more. You did a heck of a job, Bush dude!

And to think that this man was once the President of the United States! Oh the horror!