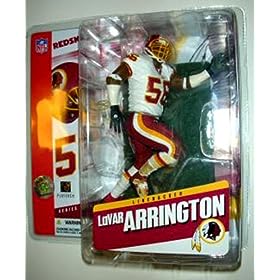 LaVar Arrington's big profile in the New York Times over the weekend reminded me to check in on the status of his soon-to-open P.G. County sports bar, The Sideline. As he told the Times,

The restaurant will feature a luxury box, a suite for his celebrity friends that overlooks the floor of the restaurant. The distinguishing feature is the bar, built under a 23-foot hollowed-out stucco football standing on its end. It will be painted to look like a college ball.

The restaurant's Web site is still touting a Fall 2007 opening date, but it's also reprinting the help wanted ad that once ran on Craigs List. I had meant to quote the ad back then, and possibly I did, which would make this post semi-worthless, but maybe it's worth repeating anyhow, because it's one of the better help wanted ads I've ever seen:

We're seeking to hire the areas most beautiful and talented female waitresses, hostesses and bartenders. If you're over 21, physically fit, attractive and outgoing with lots of personality then The Sideline is looking for you!...Please bring a driver's license, a recent photograph and your resume.

The only thing I never understood was, if you were requiring beautiful and talented and physically fit and attractive waitresses to show up for an interview, why did they also need to bring a recent photograph? Oh, wait, I get it. Yuck.

Wait, he was named after Reading Rainbow's LeVar Burton?

If Lavar has a copy of the menu, I guarantee you it's never been opened.

This is the dream that the BET Soundstage never realized.