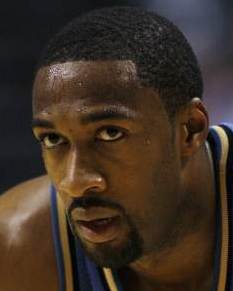 Completely running out of Gilbert photos.

Honestly, with his regular 3,500-word soul-baring missives on his own blog (He's bowled a 277? He thinks Nick Young is top-two in this rookie class?), you'd think Gilbert would run out of material at some point, but Men's Journal got him for a pretty brief one-page "Exit Interview" on the back page this month, and wouldn't you know, he rewarded that magazine with at least three things that probably deserve separate entries. Maybe four. Ok, maybe five. In no order.

* When asked about his favorite drink, Gil says this:

"I order a Corona and a Shirley Temple, then mix them 50-50 in an extra glass. I've been doing it for about a year now. It tastes like a sweet Corona. I call it the Agent Zero."

* When asked about the worst physical pain he's ever experienced, Gil gives an answer, after the jump, that is possibly offensive and will almost definitely make you cringe:

"When I was new in the NBA the team veterans convinced me to shave, you know, down there, because they said the hair stinks. I used my girlfriend's razor, which was rusty and gave me keloids. The doctor prescribed medicine to dab on, but I just poured it all over. Three days later I woke up screaming. The skin was burnt off my scrotum, down to my crack, everything -- just raw flesh. I still had to run and play, so I used a numbing spray for a month until it healed. Now I use clippers."

* And when asked about his favorite place on earth, Gil says this:

"I'm building it right now in my backyard: a replica of Hugh Hefner's pool, only a little better. It has a grotto and everything, but with flatscreen TVs, a kitchen and a bathroom. No bunnies."

Out of respect for Men's Journal, whose Web site seems frozen in December, I'll refrain from excerpting the entire interview, at which point I guess it would no longer be an excerpt, but yeah, there are at least two other tremendous answers. And you'd best be sure that the next time I'm in a bar, I'll be throwing back an Agent Zero or two. Although I think I'll pass on burning the skin off my groin area. And I don't like swimming.

(Many thanks to reader Jason for the tip. See also Gil's Q&A with SLAM, via True Hoop.)

At first, I laughed. Then I cried in pain. Ouch. Funny yet painful.

it's breathtaking, I highly suggest you try it.

Eddie Venom is relishing this moment like you wouldn't believe.

What a goof ball.

why on earth would you shave your whoo-haw with a rusty razor?

"why on earth would you shave your whoo-haw with a rusty razor?"

I love how you edited this from your previous post...That was a real "ballsy" headline...Though it really smarted when you chastised me about the Local 11 poll being not some joke and "[you were/are]actually publishing the results on the pages of a pretty serious newspaper."

Your Forgiven Bogman, but I hope the china shot stung.

I saw the new title and thought we were going to get more on Gil's drinking habits.

From the looks of it, the Men's Journal website is stuck in December of 1997.

I just love Gilbert. He talks about the crazy things he does which makes him human just like the rest of us. Hmm....Corona and a Shirley Temple mixed. Interesting. Anybody ever tell Gil about Coolers LOL

Doesn't Gilbert have any sense of decency? Just reading that quote made me gag. He should be ashamed of himself for talking about that in public. Really Gilbert? A Corona?

Whats so "tremendous" about his favourite place in the world being his pool? and his favourite drink being called an "agent zero". give me a break!

Well that locked it up, Gilbert has to resign with the Wizards next year...I mean he's bascially building his own Playboy mansion, who can leave that behind?

My favorite Drink is the thugs passion

Gil gets 'Zero' manhood points for these two anecdotes. I never knew my favorite baller was a little girl. Corona and shirley temple?

He should just be a man and drink a smirnoff ice.

And manscaping his junk? With a oxidized razor? Oh, Gil, your killing me...

ahah gil, i love ya

"beer and ginger ale? yuck"
It's called a shandy, and it's an Irish drink. When we had half of a flat keg leftover we bought about five 2 liters of ice cold gingerale, and mixed up pitchers. It's drinkable.

P.S. Gilbert has nothing to be ashamed of shaving his junk, everybody knows that guys that take care of the hair down there get more head. (It is important to closely follow directions on medication, however.)

there is the professional world of warcraft power leveling here. welcome.