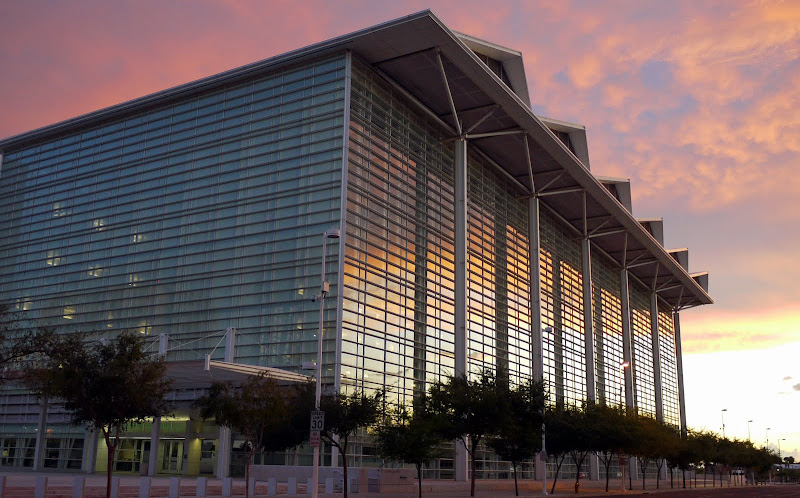 The Sandra Day O'Connor Federal Courthouse in Phoenix is one of 27 newer judicial facilities with excess space. (Image courtesy of USCourts.gov)

You could call it Extreme Makeover: Courthouse Edition: The federal government's landlord is building courthouses that are bigger than necessary, according to a preliminary report by government auditors.

The Government Accountability Office revealed Tuesday that 27 of the 33 federal courthouses built by the General Services Administration since 2000 contain about 3.6 million square feet of extra space -- or 28 percent of the total federal court space built in the last decade. The excess space has cost $835 million in construction costs and $51 million in annual rent and operations costs, GAO said.

The report came at the request of a House subcommittee that oversees federal court construction. It cited three reasons for the extra space: courthouses are being built larger than the space authorized by Congress, federal courts are overestimating how much space they need and judges aren't sharing courtrooms.

“The findings of government waste, mismanagement, and disregard for the congressional authorization process are appalling," Rep. Mario Diaz-Balart (R-Fla.) said at a hearing about the report.

"We built only courtrooms requested by the Judiciary and authorized by Congress," Peck said. "GSA has been forthright and transparent in all of our documents, testimony, and briefings to Congress throughout the history of our courthouse program."

Regardless of whether GSA or GAO is correct, it's obvious that newer federal courthouses have plenty of elbow room for Lady Justice and her scales of justice.

• Question of the Week: Would freezing pay raises be a good way to cut government spending? E-mail your thoughts to federaleye@washingtonpost.com and please include your full name, hometown and employer (if you're a federal worker or contractor.) We may use your responses in Friday's Washington Post.

DEFENSE DEPARTMENT:
• Obama to send more National Guard troops to U.S.-Mexico border: He will deploy an additional 1,200 personnel to the southern border and request $500 million in extra money for border security.

FEDERAL PROTECTIVE SERVICE:
• Head of federal building security agency transferred: The director of the beleaguered agency responsible for protecting federal buildings will take a liaison role with the Department of Homeland Security in June.

JUSTICE DEPARTMENT:
• Obama administration backs Vatican in pedophile case: In a filing on Friday, the solicitor general's office argued that the Ninth Circuit court of appeals erred in allowing the lawsuit brought by a man who claims he was sexually abused in the 1960s by the Oregon priest.

• DOJ nixes Sestak special counsel: Government lawyers have rejected a Republican request to appoint a special counsel to investigate allegations that the White House offered a job to Rep. Joe Sestak if he would drop out of the Pennsylvania Senate Democratic primary.

MMS:
• Report shows close ties between rig inspectors, oil industry: Inspectors with the agency routinely took gifts from the companies they were supposed to be policing, including hunting trips, college football tickets and meals, according to a new report.

STATE DEPARTMENT:
• Why the State Department won't put North Korea back on the terror list: The calculation is that the listing, which administration officIals see as having been overly politicized by the Bush administration, is more trouble than it's worth.

• No major breakthroughs as U.S.-China talks wind down: At the 2nd annual Strategic and Economic Dialogue, Chinese and American officials signed seven memorandums of understanding. But on the bigger issues, China did not seem to budge.

re: question of the week.

Ok, let me get this straight. Federal hiring takes somewhere between 80 & 200 days, to get a job where your pay will get frozen, or possibly reduced.

Why not just admit they're going to freeze hiring & give people incentive to quit instead?

Get rid of private bathrooms and private law libraries for each judge. And make them pay for parking.

The Sestak thingy is so silly. It's called politics and Karl Rove was the Grand Master of dealmaking.

Mar. 26, 2010
>>>...... after Rep. Ben Gilman found his congressional district eliminated by redistricting in 2002, the White House tried to persuade him from challenging another Republican congressman in another district by considering him for an administration position. Karl Rove repeatedly intervened in Republican primaries. And Tim Pawlenty is not a senator because Rove urged him to run for governor instead.

>>>...... after Rep. Ben Gilman found his congressional district eliminated by redistricting in 2002, the White House tried to persuade him from challenging another Republican congressman in another district by considering him for an administration position. Karl Rove repeatedly intervened in Republican primaries. And Tim Pawlenty is not a senator because Rove urged him to run for governor instead.

This report is treason.

The Empire needs imposing representatives in the provinces.

Re: the courthouse construction issue, here's something The Post might investigate: could it be more than a coincidence that GSA builds more space than is necessary while, if I'm not mistaken, also serving as the Federal Government's landlord?

Could it be that the reason for the GSA over-building lies somewhere in that $51 million of extra rent and operating expenses the GAO report estimates all that unused/unneeded space costs the judiciary every year? Who collects that rent? Who operates those buildings? Oh, right . . . GSA.

I was in the Prettyman federal courthouse yesterday for jury duty. What a beautiful building. Long, wide corridors. Marble everywhere. Huge lobbies. Vaulted ceilings. The HVAC bill must be enormous. What a waste of space and money.

"The Sestak thingy is so silly. It's called politics?"

Offering a bribe to an elected official is called a FELONY!

Try reading up on federal election law before you make a total fool out of yourself!

Considering the depth and breadth of corruption in our government that actually costs money and affects citizens, the wheeling and dealing about Sestak is the least of our/my worries.

As mentioned above, it was a common arm-twisting tactic by the Turdblossom machine.

Considering the lies, failures and treason throughout that administration that were tolerated when in progress and later the refusal to prosecute all the people from that administration who should be a in jail, I can't imagine a case being brought against Turdblossom (Rove) for what is a piddling felony compared to so many others committed in the name of America that were worse.

THEY LIED - AMERICAN TROOPS DIED - TWO TRILLION IN WASTED TAXPAYER DOLLARS FOR A FAILED ATTEMPT TO SECURE IRAQ'S OIL WHILE THE WEALTHY GOT TAX BREAKS.

Don't talk to me about piddling job offers.