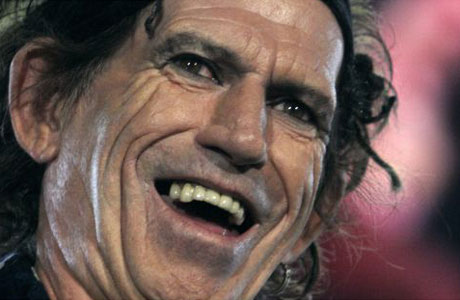 Yeah! What? Ehm, can you repeat the question?
A Keith Richards interview is an exciting yet terrifying proposition.

Richards is one of rock 'n' roll's greatest living* characters; but he's also a notoriously challenging interview subject, given his penchant for indecipherable, fragmentary speech.

I love a good challenge, though. And so on Monday, I'm scheduled to get Keith on the phone for a short interview. Should be ... interesting.

And it could be your question that Keith is (semi-) answering: I'm hoping to ask at least one question from the Post Rock commenterati. If there's something you've been dying to know about Keith Richards, post now or forever hold your Captain Jack Sparrow jokes.

(* = according to media reports)

has keith ever thought about doing a collection of his acoustic numbers with the london philharmonic?

How important was Ahmet Ertegun to the Rolling Stones? How did his death affect you and the rest of the band?

In "Gram Parsons: Fallen Angel," it's heavily implied that a summer Gram and his family spent in France with Keef and his family jump-started Gram on the downward spiral of drug abuse that eventually ended his life. I mean, I realize adults make their own decisions, but, in retrospect, I wonder whether Keef feels any kind of remorse, or if he's just content with having made it out alive himself.

Does playing the same riffs you've played at this point litteraly 10,000 times before ever get boring?

I'd like to know what Keith's favorite/best song that he's written is. Or does he think he still hasn't written it.

Are we ever going to get a New Barbarians reunion? The Cap Center is no more but the Baltimore Civic/1st Mariner has hosted two Stones show and would be a suitable substitute.

Move back to Redlands and live out your twilight years with Anita. Love ya, Keith.

Will we see another studio album from the X-Pensive Winos? Please?

What are some of his favorite reggae/dub LPs?

If there was a fire and you could only grab just one of your guitars, which one would it be and why?

How do you rate yourself as a guitar player?

Can you please give the true story behind Wild Horses? I've heard many conflicting stories about it.

J. Freedom - I remember you from your days at the Bee here in Sac.

Too bad the interview is by phone, Keith is much better in person. I named my kid after him and have gotten to know him a bit - great guy. Here are some ideas for questions.

1. I saw the Louis Vitton Photo shoot and thought it was a brilliant marketing idea. Why did you decide to do it?

2. Were starting to hear more and more Beatles songs in commercials. The only Stones songs we seem to hear are the ones Alan Klein has control over. Will there be a time when you feel comfortable about allowing companies to use your music to endorse their products?

3. Speaking of Alan Klein, when was the last time you ran into him?

5. I notice your drink of choice these days is called Nuclear Waste. When and why did you switch from Jack Daniels?

6. Have you ever been asked to take a drug test?

8. Have you ever had an out of body experience?

9. Do you believe in reincarnation?

10. Can you give us some background on your "Open G" style of playing the guitar?

11. After listening to A Bigger Bang, it seems as if this was the first time in decades where you and Mick spent some quality time collaborating on the creative front when it comes to new Stones music. Am I off base?

12. I've heard a rumor of Mark Ronson being involved in the next Stones album, any truth to that rumor? Would you bring him in to work with Don Was, or would you try and go in a different direction than you've gone with what Don brings?

Let me know if you use any of these- thanks