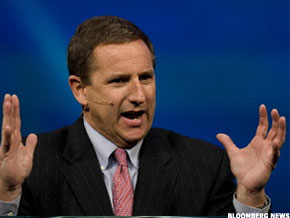 Hewlett-Packard on Tuesday sued former CEO Mark Hurd for breach of contract and putting the firm’s trade secrets at harm, one day after Hurd accepted a position as president of software competitor Oracle.

In a civil lawsuit filed with the Superior Court of California for the County of Santa Clara, HP contended that Hurd had received millions of dollars of compensation with the promise of keeping the Silicon Valley printer and software maker’s trade secrets intact. At Oracle, which competes in enterprise software and servers, HP claims Hurd can't do his new job without spilling the beans on HP's most important trade secrets.

“HP is informed and believes and thereon alleges that Hurd has put HP’s most valuable trade secrets and confidential information in peril,” the company said in a statement. “In his new positions, Hurd will be in a situation in which he cannot perform his duties for Oracle without necessarily using and disclosing HP’s trade secrets and confidential information to others.”

Hurd, who resigned from HP on Aug. 6 amid a scandal involving a marketing contractor, had signed contracts with his employer promising that he would not take a job with a rival for 12 months after leaving the firm. Such agreements are standard at Silicon Valley firms, which guard their patents and business plans fiercely. But it is rare for such a dispute to occur at the highest levels of high-tech giants such as HP and Oracle.

Oracle CEO Larry Ellison, who criticized HP for pressuring Hurd to resign, announced on Monday that he had snapped up Hurd as president of the enterprise database software giant. A spokeswoman for Oracle declined to comment on the lawsuit.

In an announcement Monday, Ellison said, "Mark did a brilliant job at HP and I expect he'll do even better at Oracle."

Another "yellow dog" contract. No wonder we need some Unions that are real.

Please explain how any kind of union contract would prevent golden parachutes for CEO's?

Read this strange story about a web targeted marketing firm, and how one of its managers wanted to become a fiction writer: